July, 1902 the U.S. Army announced it would be building military quarters in Monterey.

Monterey was eager to host, support, and supply the Army, hoping it would help provide an economic boost and opportunity for its near 2,000 residents.

The Army planned to house approximately 1300 soldiers in Monterey. Few, if any, realized the new facility would forever alter the racial makeup of the Peninsula.

​November 10, 1902 the 1st Squadron of the 9th Cavalry arrived. These 425 men were among the first black soldiers  to be stationed in California. They established a tent encampment in the hayfields near China Point in Pacific Grove. Today “China Point” is Stanford University’s Hopkins Marine Station.

Their mounts were left in the Philippines so they had to break new horses and teach new recruits how to ride. Locals loved the constant “rodeo” and came out to watch their Field Days. They developed many friends among the locals.

Two of the soldiers in the photo are Henry H Smith,  & Louis Smith, brothers of Wellington Smith, Sr a former Pastor of the First Baptist Church of Pacific Grove and primary founder of the Monterey NAACP.

A 2 day event - starting where Buffalo Soldiers camped while building the Presidio of Monterey, taking a walking tour of the Lower Presidio where they held Field Days, and traveling their route the next day  to Sequoia National Park!

Commemorate the 1904 Route from the  Presidio of Monterey to

ROUTE TO THE PARKS

Prior to 1916 the Army was responsible for stewardship of our National Parks. In 1899, 1903 & 1904 the job fell upon the Buffalo Soldiers. Troops typically left for the Parks in May, and returned to the Presidio in November.

The Trail took them down historic El Camino Real, across the Diablo Range to the San Joaquin Valley and Sierra Nevada Range. They traveled about 280 miles (13 days) to Yosemite, 320 miles (16 days) to Sequoia, camping overnight near racetracks, roadhouses, and rivers.

​​From Los Banos the soldiers continued their trek through the Central Valley to Madera where they rested overnight before splitting up for their summer duty.
1904 - 9th Cavalry, Troops "C" & "D" served in Sequoia, Troops "A" & "B" served in  Yosemite.
​

(Fact - Buffalo Soldiers were instrumental in building the Presidio of Monterey where they were garrisoned from 1902 - 1904.) 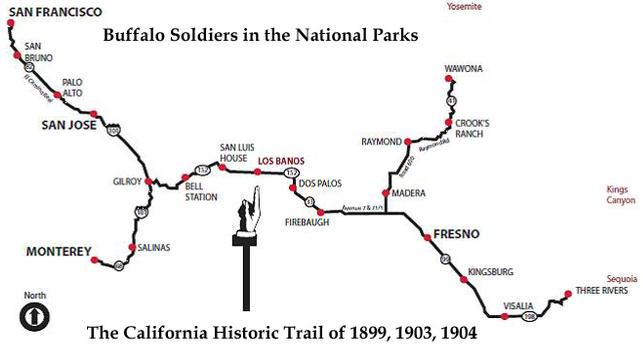 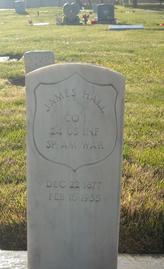