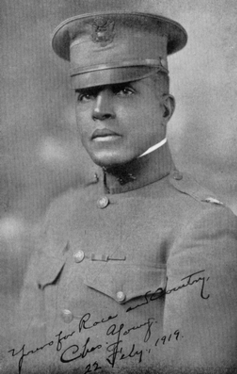 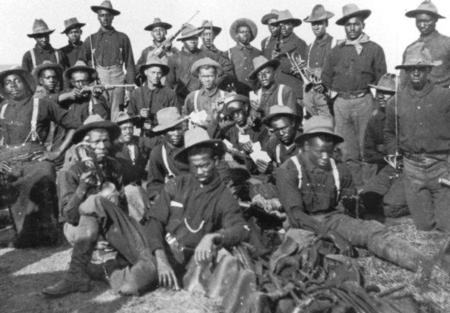 May of 1903 - San Francisco, CA.  Captain Charles Young & the 9th Cavalry serve as Escort/Honor Guard to President Roosevelt. The video is the first time the President is captured in video, and the first time black soldiers honored to serve as Presidential Escort.

President Roosevelt did this in appreciation of the Buffalo Soldiers heroic efforts during the battle for San Juan Hill.

July, 1902 the U.S. Army announced it would be building military quarters in Monterey. Monterey was eager to host, support, and supply the Army, hoping it would help provide an economic boost and opportunity for its near 2,000 residents.

The Army planned to house approximately 1300 soldiers in Monterey. Few, if any, realized the new facility would forever alter the racial makeup of the Peninsula.

November 10, 1902 the 1st Squadron of the 9th Cavalry arrived. These 425 men were among the first black soldiers to be stationed in California. They established a tent encampment in the hay fields near China Point in Pacific Grove. Today “China Point” is Stanford University’s Hopkins Marine Station. 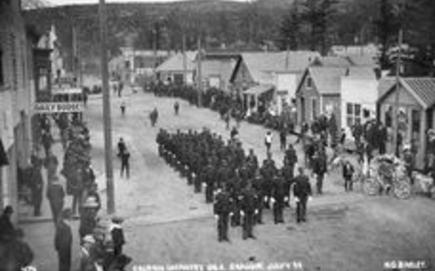 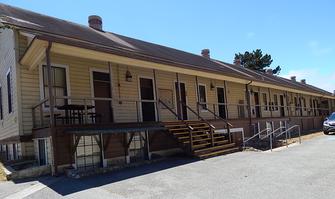 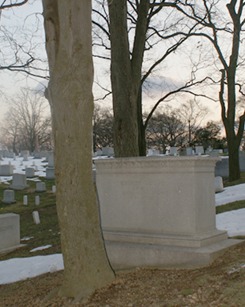 Another Field Day photo - look at all the people in the background! >>> 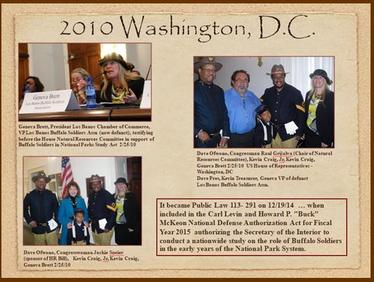 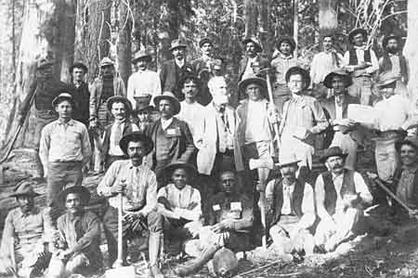 When the Buffalo Soldiers arrived in Monterey in 1902 they'd left their mounts in the Philippines. They had to break new horses and teach new recruits how to ride. Locals loved the constant “rodeo” and came out to watch their Field Days. They developed many friends among the locals.

<< Two of the soldiers in the photo are Henry H Smith,  & Louis Smith, brothers of Wellington Smith, Sr a former Pastor of the First Baptist Church of Pacific Grove and primary founder of the Monterey NAACP. Buffalo Soldiers made positive contributions to the Monterey Peninsula. 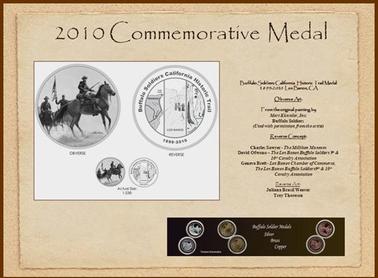 1903 - Captain Charles Young with road crew - Sequoia National Park.Young and his troopers arrived in Sequoia after a 16-day ride to find that their major assignment would be the extension of the wagon road. Hoping to break the sluggish pattern of previous military administrations, Young poured his considerable energies into the project, and dirt and rock began to fly.  During the summer of 1903, Young and his troops built as much road as the combined results of the three previous summers. >>> 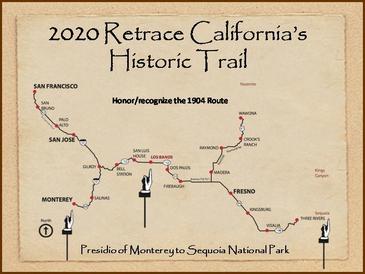 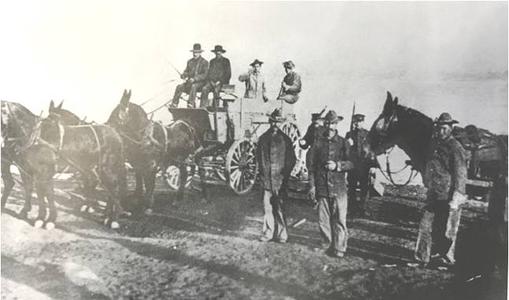 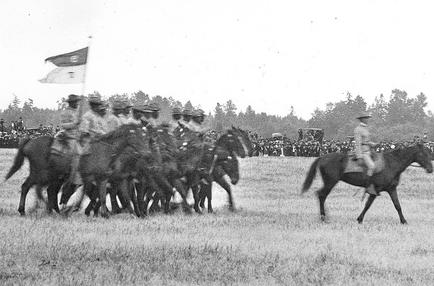 Private George Johnson (from Alabama), 9th Cavalry was the first person buried in the cemetery at the Presidio of Monterey (1904). 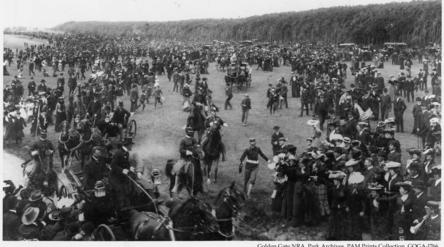 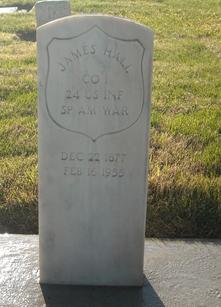 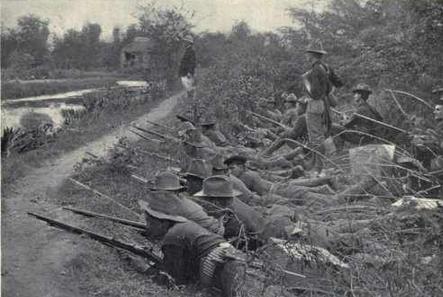 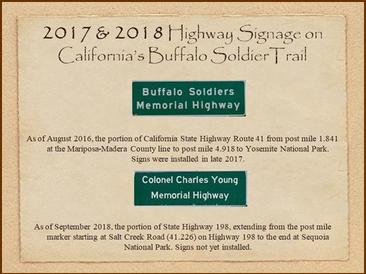 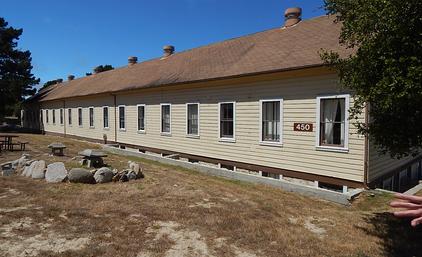 The photo above and to the right are Buffalo Soldiers parading

Arlington National Cemetery’s website states the story of Colonel Charles Young deserves the widest possible telling, yet few Americans have ever heard of this remarkable Veteran of Foreign Wars who spoke six languages, was the 3rd Black graduate from West Point, taught Military Science at Wilberforce University, was the 1st Black Military Attaché, 1st Black Superintendent of a National Park, Commander of the 1st  Black Military Unit requested to be a Presidential Honor Guard, the Highest Ranking Black Officer from 1894-1922 and the son of former slaves.  His strength of character and personality caused him to be held in high regard by both blacks and whites; he overcame prejudice, as evidenced by white Southern officers who ranked beneath him, yet held their (then) Captain in the highest esteem and spoke loudly in his praise.

Young poured his considerable energies into the project, and dirt and rock began to fly. By mid-August wagons were entering the mountain-top forest for the first time. Still not content, Young kept his crews working and soon extended the road to the base of the famous Moro Rock. 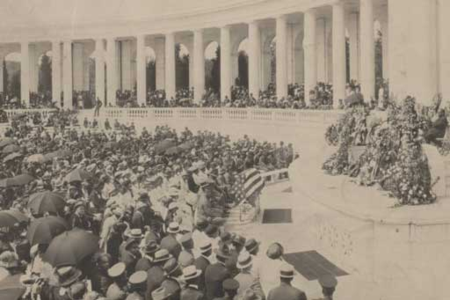 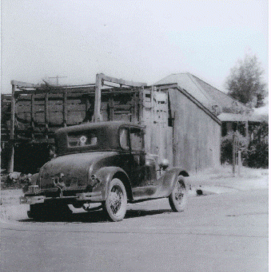 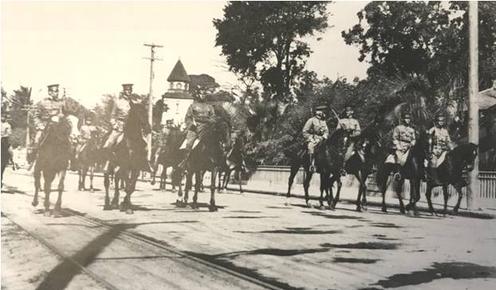 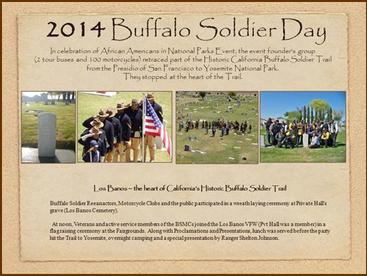 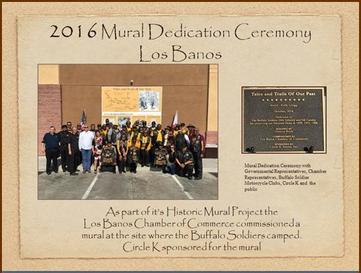 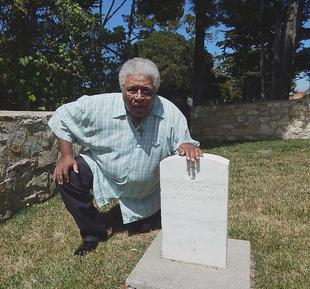 Private Johnson's burial caused the Presidio of Monterey to be the first integrated cemetery in the military.

Pastor Bruce Rivers of Los Banos honors the man and the history.

Called the most integrated battle force of the 19th century, the troops of the 24th Infantry and the 9th and 10th Cavalry fought up the slope of San Juan Hill along with White regular army regiments and the 1st Volunteer Cavalry (the Rough Riders) led by Lieutenant Colonel Theodore Roosevelt. Twenty-six Buffalo Soldiers died that day, and several men were officially recognized for their bravery.

Theodore Roosevelt commented "… no one can tell whether it was the Rough Riders or the men of the 9th who came forward with the greater courage to offer their lives in the service of their country." 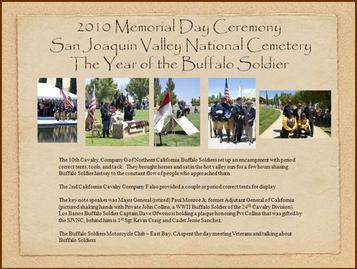 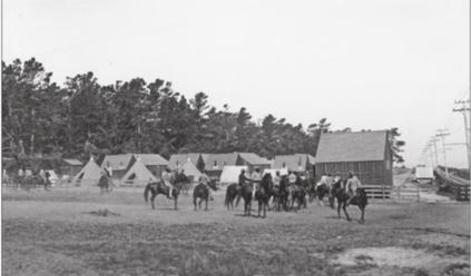 << Charles Young was assigned to duty as military attaché to Liberia. While conducting an intelligence mission he became critically ill and died in Lagos in 1922.
Colonel Charles Young  was given a Hero’s Burial on June 1, 1923; his funeral one of few ever held in Arlington’s Memorial Amphitheater. Black schools across the nation closed in his honor; an estimated 50,000 people lined the processional route from the train station through the Capitol.

1899 - The 24th Infantry spent one month in Sequoia National Park before being shipped to the Philippines ~ they are the only Buffalo Soldiers to travel one direction of the Trail!
Private Jim Hall spent ONE night in Los Banos in 1899. Voter records show him here in 1905 - where he lived until his passing in 1955.

It's possible Private James Hall is one of these pictured soldiers - 24th Infantry in the Philippines 1899 ...